Politics: Speaker Designate John Boehner: A Traitor to His Class 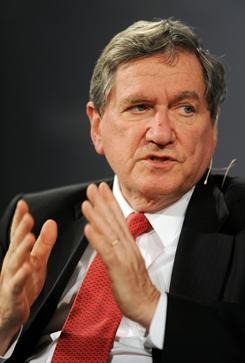 Richard Holbrooke, a U.S. career diplomat and President Obama's special envoy to Pakistan and Afghanistan, died on Monday, December 13.  He was 69.

Among his achievements were writing part of the Pentagon Papers and serving as the architect of the 1995 Bosnia peace accords, which ended the 1992-95 war in Bosnia.

I interviewed Holbrooke in November 2005 for an article I was writing about the Dayton Peace Prize, an event sponsored by Dayton Peace Prize Committee.  The committee is part of a community planning group called Dayton: A Peace Process (DAPP). It organized a series of high-profile events in fall of that year to commemorate the 10th anniversary of the Dayton Peace Accords.

The article was subsequently published in the Christian Science Monitor on November 17, 2005.   Here are some excerpts:


Holbrooke chose Dayton as the summit site, an unimpressive alternative to opulent settings in Geneva, Paris, or Washington. The Wright-Patterson Air Force Base, the largest in the country, provided stark accommodations for the nine participating delegations, sealed off the press, and displayed America's air power. This environment augmented Holbrooke's use of the "Big Bang" strategy - now known in diplomacy circles as a "Dayton" - where negotiators are locked in a room until they reach an agreement.

Proud that their town had been selected for the summit, Daytonians responded by welcoming the negotiators and then forming human peace chains around the base, holding candlelight vigils, and praying for peace throughout the 21 days of talks. Dayton's ethnic diversity did not escape the notice of the warring Balkan leaders, either.

"I love them," says Holbrooke of the people of Dayton in a telephone interview. "I believe that they are the absolute epitome of the best of America. They just showed what great energy and faith is out there in the heartland, which was dismissed by Washington."

Dayton City Commissioner Matt Joseph offers a more down-to-earth assessment: "People reacted. There was a fire in Bosnia, and it was brought to our neighborhood. We took our garden hoses and tried to put it out. We just acted like neighbors. That's what we do in Dayton. If they're in trouble, we're in trouble."

Community leaders created the Dayton Peace Prize in 1999 to recognize individuals who contributed to the peaceful reconstruction of a society torn apart by war. A stipend of $25,000 goes to each recipient, who agrees to donate the money to a charity in the Balkans. The award, which is not given every year, went to President Bill Clinton in 2000 and philanthropist George Soros in 2002.

Posted by Olga Bonfiglio at 9:16 PM No comments:

Victorian Bakery has its own website at  http://victorianbakery.com
Posted by Olga Bonfiglio at 2:21 AM No comments:

I went to Rwanda in November to accompany my pastor, Fr. Ken Schmidt, and his parish associate, Sharon Froom, a therapist, as they gave trauma recovery workshops to 123 priests and human service professionals who are counseling people who survived the genocide of 1994.  One million people were killed during the 100 days that the genocide lasted and 100 percent of country is traumatized by this event.

We stayed in Cyangugu, Rwanda, which is located in the southwestern part of the country.

Here is a link to a story I published in my home newspaper, the Kalamazoo Gazette on Saturday, December 11.

During the trip I kept a daily blog of our activities and you can see it on Trauma Recovery Associates in Rwanda.

I'm currently writing more articles and will post them on this blog as they are published.
Posted by Olga Bonfiglio at 1:23 AM No comments:

Today, the Kalamazoo Foods Market opened its doors and it was a hit with shoppers.

Kavan and David Geary are the owners of the market.  Hear Kavan talk about it on the video.

Vendors were also happy to have this new market especially after the City of Kalamazoo kicked them out of the Bank Street Market parking lot last March.  See the Gazette story.  This year the city is offering stalls during the winter for $200.  Has anyone taken them up on that?

Congrats to the Geary brothers!
Posted by Olga Bonfiglio at 7:52 PM No comments: