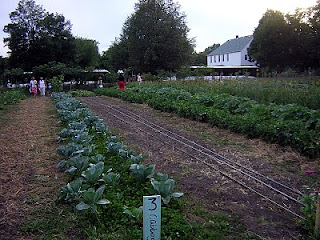 Energy Bulletin (Oct 16)
"These Weeds Aren't Made for Whacking"
http://www.energybulletin.net/50413

Opportunity Knocks When It Comes to Local Food
http://www.energybulletin.net/node/47980

Posted by Olga Bonfiglio at 10:39 AM No comments:

You cannot imagine the extent of Hurricane Katrina’s destruction until you see New Orleans. Nor can you understand the people’s depth of humanity that is slowly leading them to recovery until you witness what they have done to “rebuild, regenerate, and re-spirit” their city over these past five years.

Recently, I had the opportunity to visit The Big Easy to attend the annual American Planning Association conference, which focused on the effects of Hurricane Katrina and the recovery effort.

As my plane flew over the vast expanse of Lake Pontchartrain, an eerie feeling came over me. The warm, sunny skies betrayed the catastrophe that occurred here five years ago when 53 breaks in the levees of three canals spilled the lake into the city below. No boats on the shallow, salty lake (actually, it’s an estuary), as I'm accustomed to seeing on my precious Lake Michigan.

As we made our approach to land, the marshy bayous came into view and I creeped out thinking of dangerous reptiles lurking in this very hot, humid, watery place.

Once I deplaned, I began to feel the city in a whole new way. A Creole kitchen with its gumbo, grits and seafood delicacies “welcomed” me with its enticing smells. And this was airport food! Statues of jazz trumpeter Louis Armstrong, for whom the airport is named, instantly signaled the importance music has for Orleanians. And the long walk through the terminal exposed me to some posted FEMA photos of Katrina’s rescued victims where their faces revealed fear, exhaustion and relief all at the same time. It was then I knew I was in an extraordinary and soulful place.

The half-hour cab drive from the airport took me on Interstate-10 and on its high bridges where I could see the city’s broad expanse and unremarkable skyline. When the Superdome came into view (it looks like a giant spaceship), I literally jumped in my seat. The New Orleans Saints' victory in the Superbowl had transformed the football team’s home-stand, but the pall of tragedy on this place still remained prominently etched in my memory. New Orleans is considered one of the most haunted places in the world and Katrina undoubtedly contributed many new ghosts to its nearly three centuries of history.

My cab stopped at one hotel to drop off a passenger. The doorman sported a white top hat and tuxedo and graciously greeted his new guests and handled their luggage with both Southern charm and in keeping with the beaux arts style hotel. In any other place this get-up would be considered hokey, but I reckoned outlandishness makes New Orleans what it is—and frankly, I found it enchanting

My cab driver, of Asian Indian extraction and here for 26 years, said that “everyone was affected” by Katrina but that he was one of the lucky ones. His insurance covered $65,000 worth of damage on his house and his family was now living in it just fine. So many others, however, either can’t get insurance or they’ve given up on the prospect of returning home altogether.

After I settled in my hotel room I decided to walk to the French Quarter and consulted the concierge on directions. She was wearing fleur-de-lis earrings, the symbol of New Orleans and Louisiana, especially now after Katrina. She told me the French Quarter Festival (www.fqfi.org/frenchquarterfest) was on for this weekend and that I shouldn’t miss it, so that’s where I started. It was high noon on the first day and already huge crowds had gathered for the festival with its local music and food specialties. There were so many people that we all moved together slowly as in a swarm. Suddenly, I was rapt by my environment and set out to eat anything and everything I could to acquire a culinary overview of New Orleans.

I started my food journey with “the best shrimp po boy in the city.” At first, I didn't know what to make of this messy sandwich on a specially-made bun but since it is a common dish here, I was determined to try. Now the sandwich brought out something in me that I've never done while traveling but it helped me start conversations with Orleanians: “This is my first time here,” I’d say gleefully, and they’d respond.

For example, one man I sat next to at a restaurant bar gave me a fried oyster appetizer to taste after he saw my enthusiasm with my half dozen raw oysters—and Louisiana hot sauce, of course. At the festival after I ordered my muffeletta, a woman told me about the delicious muffelettas she makes. People at a table next to mine at Café du Monde offered to take a photo of me with my beignets when they saw me struggle to do it myself.

And here's the point. The city seduces you to participate through its outstanding food, homegrown music, dancing, ubiquitous history, beautiful architecture, vibrant street scene—and friendly, warm people from all stations in life who truly love their city. This is not a brand of brute-force tourism, although the city’s economic development depends on tourists and conventioneers. Rather, New Orleans is an authentic and time-honored place that bids you be a part of all its zaniness and sensual pleasures.
Posted by Olga Bonfiglio at 5:13 AM No comments:

Off to New Orleans

I'll be in New Orleans April 9-13 to attend the American Planning Association's annual conference. This will be my first time in the city or at an APA conference and I'm very excited. My focus for writing will be on urban agriculture as economic development, sustainability issues in planning, and urban planners' recovery work after Hurricane Katrina.

I'm going to the conference as a reporter, so I'll post my writings on this blog and other news websites.
Posted by Olga Bonfiglio at 6:21 PM No comments: